This article is about the main character from The LEGO Blazer Movie. For other uses, visit Trail Blazer.

Wonders of the Crestallis Realms

Trail Blazer, or simply Trail or Blazer for short, is a teenage mutant who has the power to control fire and heat in multiple ways for fighting and several other techniques, and is the current leader of the Oddity Allegiance, succeeding Mace Metallon and The Construct Captain, and mainly protects the Brickopolis realm in the Crestallis Realms of Elements.

Originally a resident and local scientific doctor from the Crestal Realm that he was outcasted from before its destruction, Trail eventually sought out refuge in a new realm, Brickopolis, where he met with and was being mentored by Jaxon Orville. After learning from Jimbo, Trail set out to start a new life in Brickopolis, and during his time there, Trail encountered other mutants who were part of an enhanced team, and was prompted to work with them after he had accidentally caused the release of the evil Lord Blox and aided in the fight against Blox, and effectively put an end to his devious plans to control Brickopolis and saved the realm from falling into chaos and destruction. Trail met with several new and old friends and allies in the fight against Blox and aided in restoring peace in Brickopolis to better prepare the realm for the future in case of over threats occurring.

Following his victory in the fight against Blox, Trail was appointed by Mace Metallon and The Construct Captain as the new leader of the Oddity Allegiance, and he continued to mentor and train the mutant members while watching over the Crestallis Realms of Elements to keep it a better and safe place, up until Riftaar's attacks across the Crestallis Realms ensued, which prompted Trail to bring the Oddity Allegiance to unite and find common ground to allow them to prevail against Riftaar and save their own and many other universes.

Trail Blazer is incredibly skilled in acrobatics and can shoot fire from his hands, can transform into a "Burst Mode" to fly through the sky with immense speed, and can be immune to heat and burns. He can also use his fire powers to illuminate darkened areas to see better in them and use them to start and spread enormous or contained fires at his own free will. He is also skilled in using his Flare Bow with precise accuracy in hitting his intended targets in ulterior ways, with his provided arrows often having effects of fire, lava, and explosions, which are similar to Trail's own power set. Trail is also a very creative-minded individual and is experienced with different artistic styles.

Trail Blazer has a bit of a temper at times, usually during attacks and when people are acting in foolish matters, which coincides with bursts of fiery rage that are reminiscent of his "Burst Mode", but he often keeps his cool unless provoked. Trail is most often serious when it comes to planning and executing missions and reprimanding his fellow teammates to ensure that things go accordingly, but secretly Trail cares for others and doesn't want to show it upfront, becoming more serious as a result. Trail is willing to do what he must to get these missions done and defeat the enemy, even if he causes his friends to be left behind or hurt in the process. Trail does joke around with his friends and teammates during missions or just casual meet-ups, just so he has a better time when able to settle down. At times, Trail uses his artistic skills to draw and create comic books to relieve himself of stress or anger, a tactic that has proven useful for him.

Through the use of Trail's fire powers, Trail can summon and harness a Fire Rod fuelling with burning flames that can be used to burn his opponents at a close-range and can be deflected off of various objects to hit opponents while in a spinning motion, creating currents of fire.

Trail uses the technologically advanced Flare Bow to fight in combat using his varying arrows each with their effects of fire, lava, and explosions, to hit his targets with precise accuracy. The Flare Bow has its targeting system that allows Trail to zoom in on his targets to ensure his aim is on point. Trail manufactured the Bow himself, but only decided to use it during several conflicts as he was not sure of its use.

Trail contains his various types of arrows in a special type of quiver that can hold and contain arrows with immense heat and fire, while also having a built-in arrow creation and restoration system to continuously produce arrows for Trail either at the push of a button or on command.

Trail has a red hood that comes with his standard jacket wear and is used to hide his face from others though technological stealth implants for when he needs to go into hiding. Trail hardly uses his hood until he is being hunted by Lord Blox and his Mørk army, but still wears it on his shoulders in case of emergencies.

Trail had a technologically advanced motorbike designed for him by a local engineer in his home realm using a design model created by Trail. The Bike can go at incredibly fast speeds, has armored plates for additional protection, and has a vast array of artillery activated by several different buttons, including some fire shooters, blasters, as well as a turbo engine. The Bike can also be used to pull off some life-saving tricks, some supplied by the push of one of its buttons.

Initially an abandoned mansion in the center of Brickopolis, Trail purchased and took residence in the mansion, courtesy of Jaxon Orville, and had it rebuilt as his big house, consisting of a lot of rooms each with their addition of luxury and entertainment. Trail used The Trail House as a means of a base and stored his prized possessions in it, until he eventually opened it up as a temporary living space and headquarters for the rest of the Oddity Allegiance, with each member receiving their own added on rooms.

As a Main Character

As a Minor Character

As a Guest Character 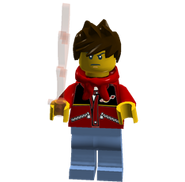 The initial design of Trail used for The LEGO Blazer Movie made using LEGO Digital Designer.

The original design of Trail. 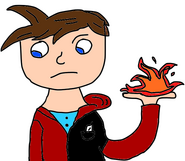 A drawing based on Trail's design.
Add a photo to this gallery
Retrieved from "https://lmmcu.fandom.com/wiki/Trail_Blazer?oldid=98351"
Community content is available under CC-BY-SA unless otherwise noted.